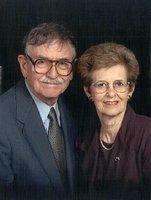 Harlan Stamford Miller, 90 of Huddleston, VA passed away Wednesday, June 24, 2020 at his residence. He was born on Tuesday, March 4, 1930 in Troy, NY, a son of the late Percy Ford Miller and Minnie Burrill Miller. He was also preceded in death by his brother, Paul B. Miller. He is survived by his wife of sixty-eight years, Nancy George Miller. He attended Blacksburg High School, Blacksburg, VA and Lehigh University in Pennsylvania. He enlisted in the U. S. Army and attended Army signal corp. radar school. His many assignments included Texas, Alabama, Montana, Alaska, Massachusetts and Virginia. He was a Systems Engineer with The Mitre Corporation in Bedford, Massachusetts having retired with twenty-five years service. Paul and Nancy moved many places but their favorite was Smith Mountain Lake in Virginia where they have lived for over thirty years. He attended Bethlehem United Methodist Church in Moneta. He was also a member of the Smith Mountain Lake Pilots Club and was an amateur ham radio operator with the call sign K1TT. He and Nancy were proud of their daughters, Cindy Holmes and Constance Nucci and her husband, Paul Kelly. Harlan is also survived by his grandchildren, Louis Nucci and wife, Kristin, Thomas Nucci and wife, Miki, Jessica Holmes and fiance, Ryan O'Meara and Kira Holmes; as well as great-grandchildren, Reimi and Rosaria Nucci; sister-in-law, Judith Miller and nephews, Brent and Todd Miller. A memorial service will be held at Bethlehem United Methodist Church at a later date. In lieu of flowers, the family suggests that memorial donations by made to Bethlehem United Methodist Church, 13586 South Old Moneta Road, Moneta, VA 24121. Arrangements are being handled by Updike Funeral Home & Cremation Service, Bedford