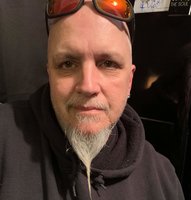 Clark Wayne Lodge, 54 of Thaxton, passed away Saturday, March 13, 2021 at Centra Lynchburg General Hospital. He was born on Saturday, November 19, 1966 in Bedford County, a son of Randy B. Lodge and Betty Walker Lodge of Bedford who survive. He was preceded in death by his second wife, Debbie Lodge. He was a talented woodworker and accomplished builder. He was a beloved son, father, brother, husband and grandfather. He enjoyed nature, music and tinkering. He was a kind hearted friend who never met a stranger. In addition to his father and mother, he is survived by his daughter, Jodi Lodge Hutcherson & husband, James; his grandchildren, Madilyn Poe Cross, Wylder James Hutcherson; step-children, Alison Overstreet and Travis Scarberry and his brother, Phillip Wayland Lodge. A graveside service will be held at 11 AM on Saturday, March 20, 2021 at Thaxton Baptist Church Cemetery with Rev. Wayne Murphy officiating. There is no visitation. Arrangements are being handled by Updike Funeral Home & Cremation Service, Bedford.