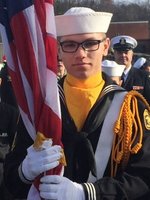 William “Billy" Benjamin Hackworth, 18, of Bedford County, beloved son and brother went to be with his Lord on April 1, 2021. Billy was born on May 29, 2002 in North Miami, Florida, son of Earl and Debi Hackworth of Bedford County. He was Homeschooled and attended several local homeschool co-ops. Billy was “all-In" for any church or community activity in which he chose to participate including Sea Cadets, Swim Team, Scouts and Football. Billy earned the Citation Ribbon Award for being an Honor Cadet because of his outstanding leadership and motivational skills displayed at the 2018 Sea Cadet Boot Camp. Billy will be loved and remembered for his fierce loyalty, infectious laugh, compassion, and sincere faith. With his friends, Billy had a joke for everything, and was the life of the party. Because of his Christian walk we have the blessed assurance that Billy is in the presence of our risen Savior Jesus Christ, and we look forward to the day we will be reunited with him in heaven. In addition to his parents, he is survived by his sister, Faith, husband, John West (Billy's best friend), his brothers, Earl and wife, Nadia, Jason and wife, Amanda, nephew James, and nieces Alexandria and Harley. He leaves behind friends that became family, including David and Bev Heckman, with children Anna and James (Billy’s best “chosen” siblings) Adam, and Jessa, his girlfriend Katie Barga, and countless extended family members and friends. The family will receive visitors from 7 until 9 PM on Thursday, April 8, 2021 at Updike Funeral Home & Cremation Service, Bedford, VA. A celebration of his life service will be held at 2 PM on Friday, April 9, 2021 at East Lake Community Church, Moneta, VA. Billy’s resting place will be at the family farm in a private service. In lieu of flowers, the family request donations to be sent to Naval Sea Cadet Corps, Roanoke Battalion, Inst. Kevin Binner, 6531 Brookhaven Ct, Roanoke, VA 24018, c/o Billy Hackworth Memorial Fund. Arrangements are being handled by Updike Funeral Home & Cremation Service, Bedford.