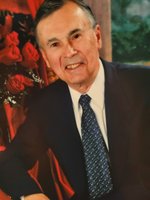 Edwin S. Cook (Ted) passed away on June 5, 2021 at the age of 84.  He was born on January 21, 1937 to E. Sumner and Lucille G. Cook of Merrick, NY.  He is survived by his wife of 60 years, Maureen, and their children David, Sharon, Kevin and Brian, son-in-law Robert Letwins and grandson Robert Letwins.  He also leaves behind his sister Carolyn Naujoks, of Flammersbach, Germany and his brothers-in-law Wilfried Naujoks, Edward Wittekind, and Paul Sainsbury, as well as many nieces and nephews. Ted graduated from W.C. Mepham H.S. in Bellmore, NY and received an A.S. in Electrical Technology from Farmingdale A&amp;T College, a B.S. in Mathematics from Hofstra University, and a M.S. in Business Administration from C.W. Post College. Ted worked for Hazeltine Corp, Grumman, and retired from his position as a Planning Manager at Verizon in 1995 where he worked for 25 years.  Ted was a Member and Treasurer of the Sunrise Yacht Club, a Sunday School teacher and an Evangelism Explosion leader at the Smithtown Gospel Tabernacle.  He was also involved in many Bible studies in various places near where he lived and worked. Ted and Maureen moved to beautiful Smith Mountain Lake, VA to enjoy their retirement years.  They enjoyed travelling across the United States and Europe, taking cruises, and travelling to the Holy Land and China.  They enjoyed the winter months for many years at Deer Creek RV and Golf Resort. Ted was a kind, caring, compassionate, and honest man.  He also had a clever sense of humor and loved sharing his faith and the Gospel with others. He looked forward to being reunited with his parents, his sister Gail, and other family and friends who have passed on. His favorite hymns were “It is Well With My Soul” and “What a Day that Shall be, When My Jesus I Shall See”. Ted is now at peace in God’s loving hands. A small family tribute was held at his home on June 9, 2021 and a Celebration of Life will be held at a future date. A special thanks to the staff at Centra Hospice for their kind care and compassion over the last few weeks. In lieu of sending flowers, a donation can be made in Ted’s name (Edwin S. Cook) to the American Cancer Society. Arrangements are being handled by Updike Funeral Home & Cremation Service, Bedford.