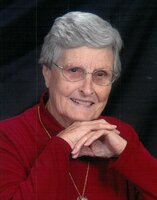 Louise McCabe Ward Zimmerman, 96, of Bedford, passed away on Sunday, December 12, 2021 at Noble Senior Living in Bedford. She was born in Bedford on April 10, 1925, the daughter of the late Hamner Edward Ward and Mary Frances Gray Ward. She is preceded in death by her husband, James Lewis Zimmerman, son-in-law, Eugene C Hawkins and brother, Clifton O Ward. She is survived by her daughter, Brenda Z Hawkins; granddaughter, Tamara H. Thompson and husband, Keith; great-grandsons, Josh and Caleb Thompson; two sisters, Dorothy Salyer and husband, Eugene, Evelyn Giles and husband, Charles; sister-in-law, Margaret Ward and numerous nieces and nephews. Louise was a long-time member of Epworth United Methodist Church in Thaxton VA. She retired from General Electric where she worked as an expediter. In her spare time, she loved spending time working in the yard and being with her family. In lieu of flowers the family requests donations be made to Good Samaritan, 2408 Electric Rd, Roanoke, VA 24018 or give online at GoodSam.care. A Funeral Service will be conducted at Updike Funeral Home Chapel in Bedford at 11:00 AM on Thursday, December 16, 2021 with Pastor Stephen Willis and Rev. Larry Ross officiating. The family will receive friends from 9:30 until 11:00 AM prior to the service. Interment will follow at Virginia Memorial Park. Arrangements are being handled by Updike Funeral Home & Cremation Service, Bedford.