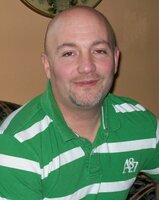 Jeremy Dale Heflin, 45 of Bedford, VA passed away Monday, April 18, 2022 at his residence. He was born on Tuesday, April 5, 1977 in Lynchburg, a son of Annie Evans Heflin of Lynch Station who survives and the late Michael Ross Heflin, Sr. He was also preceded in death by an infant sister, Pamela Ann Heflin. He was employed by Precision Fabrics. In addition to his mother, he is survived by his son, James Holden; his daughter, Taylor Holden Ford (Steven); his brother, Michael R. Heflin, Jr. (Cynthia). A graveside service will be held at 2 PM on Thursday, April 21, 2022 at Independence Cemetery with Rev. Rick Foster officiating. The family will receive friends from 12 until 1:30 PM preceding the service at Updike Funeral Home & Cremation Service, Huddleston.