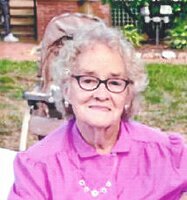 Ruby Gaynell Patterson Reynolds, 85 of Lynch Station, VA passed away Tuesday, May 3, 2022 at her residence.  She was born on Thursday, April 29, 1937 in Campbell County, VA, a daughter of the late John Rufus Patterson and Eliza Crouch Patterson.  She was also preceded in death by her husband of fifty-seven years, John Arnold Reynolds; her sons, Donnie Reynolds, Michael "Phil" Reynolds, brothers, Kenny & Calvin "Henry" Patterson and a grandson, Jason Saunders.

Special thanks and recognition to Connie & Crystal Waller who cared for their grandmother until her passing.

Funeral services will be held on at 11 AM on Friday, May 6, 2022 at Updike Funeral Chapel, Huddleston with Rev. Wayne Murphy officiating.  Interment will follow in Union Chapel Community Church.  The family will receive friends Thursday evening from 5 until 7 PM at Updike Funeral Home & Cremation Service, Huddleston.