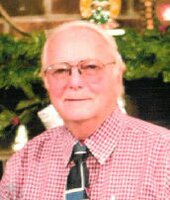 Herbert  Alfred Ashwell, 92 of  Lynch Station, passed away Wednesday, July 27, 2022 at his residence.  He was born on Thursday, September 19, 1929  in Carnard, WVA, a son of the late Otey L. Ashwell  and Goldie Rutter Ashwell.  He was a supervisor at Lane Companies retiring after 45 years of employment and a member of Mt. Horeb Methodist Church.  He a US Army veteran, having served in the Korean War.  Music was his main interest.  After retiring, he was known to play his guitar and sing  every Sunday at Church.

A Funeral service with Military Honors will be held at 2:00 pm on Sunday, July 31, 2022,  at Updike Funeral Home Chapel, Huddleston, with Rev. Riley Smith and Pastor Jane Whitehead officiating.  Interment will follow in Mt. Horeb Methodist Church Cemetery.  The family will receive friends from 3:00 until 5:00 pm. on Saturday, July 30, 2022, at Updike Funeral Home & Cremation Service, Huddleston.