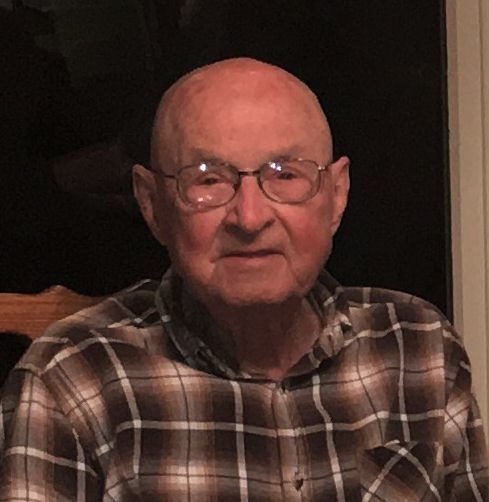 The Family wishes to thank the caregivers who provided excellent care and much love. Their efforts enabled him to remain in the home he and his beloved wife Josephine built to enjoy the view of the Peaks.

He attended Newport News Shipbuilding and Dry Dock Company’s Apprentice School from September 1940 to April 1944.  He served in the Merchant Marines as licensed engineer from April 1944 to April 1946, making 16 crossings of the Atlantic.

Community and civic leadership roles include Bedford Fireman’s Band, Volunteer Life Saving Crew, Elks Club, and Bedford Town Council.  Charles was a tireless volunteer serving as Chairman of the Board, Trustee, Elder, and Chairman of the first Capital Campaign for Bedford Christian Church.

Charles was President at Peoples Furniture for fifty years retiring in 1996.  Charles owned a PiperJ3C aircraft, “YellowBird”, and last flew at age 96.

Funeral services will be held at 11:00 AM on Thursday, August 22, 2019 Updike Funeral Chapel, Bedford with Rev. Jim Compton officiating.  Interment will follow in Greenwood Cemetery.  The family will receive friends Wednesday from 5 until 7 PM at Updike Funeral Home & Cremation Service, Bedford.