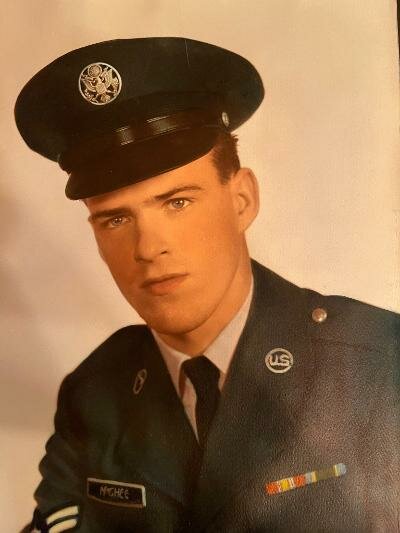 Please share a memory of Ray to include in a keepsake book for family and friends.
View Tribute Book
Ray Fredderick McGhee, 75, of Moneta, passed away on Wednesday, January 12, 2022. He was preceded in death by his parents, Henry & Loraine McGhee; brothers, William & James McGhee; sisters, Barbara McGhee, Doris Morris & Shirley Smith. Ray was a previous member of Grace Memorial Baptist Church and worked for years in Sales and Merchandising. He was a Sergeant in the United States Air Force. Surviving are his son, Chad McGhee; daughter, Wendy Austin; grandchildren, Gavin McGhee, Teagan McGhee, Iliah McGhee, Kyler Austin, Maddox Austin & Emerson Austin. A Memorial Service will be held at 4:00 p.m. on Sunday, January 30, 2022 at Updike Funeral Chapel, Bedford with Pastor Wayne Murphy officiating. The family will receive friends one hour prior to the service. Arrangements by Updike Funeral Home & Cremation Service, Bedford.
To plant a beautiful memorial tree in memory of Ray McGhee, please visit our Tree Store

Look inside to read what others have shared
Family and friends are coming together online to create a special keepsake. Every memory left on the online obituary will be automatically included in this book.
View Tribute Book
Services for Ray McGhee
There are no events scheduled. You can still show your support by planting a tree in memory of Ray McGhee.
Plant a tree in memory of Ray
Share Your Memory of
Ray
Upload Your Memory View All Memories
Be the first to upload a memory!
Share A Memory
Plant a Tree