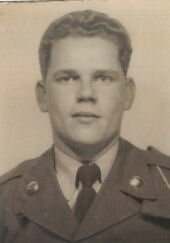 Please share a memory of Robert to include in a keepsake book for family and friends.
View Tribute Book

Robert Austin Davis, 86 of  Big Island, passed away Sunday, August 21, 2022 at Centra Lynchburg General Hospital.  He was born on Friday, July 31, 1936  in Bedford County, a son of the late John William Davis and Dollie Hensley Davis.  He was also preceded in death by six brothers & three sisters.

He was retired from Rubatex Corporation and was a veteran of the U. S. Army.

The family will receive friends beginning at 1 PM on Wednesday, August 24, 2022 at Updike Funeral Home & Cremation Service, Bedford and a funeral service with military honors will be held at 3:00 pm in the chapel with Rev. Rick Dellinger officiating.  Interment will be private.  Arrangements are being handled by Updike Funeral Home & Cremation Service, Bedford.

Look inside to read what others have shared
Family and friends are coming together online to create a special keepsake. Every memory left on the online obituary will be automatically included in this book.
View Tribute Book
Share Your Memory of
Robert
Upload Your Memory View All Memories
Be the first to upload a memory!
Share A Memory
Plant a Tree