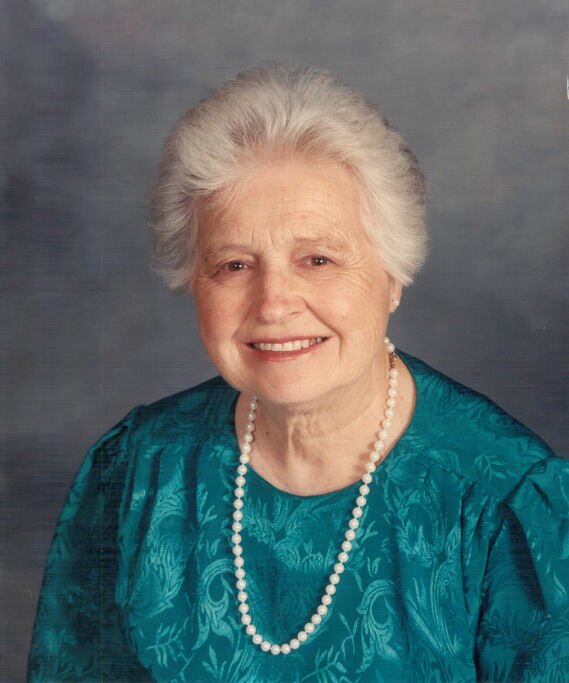 Please share a memory of Georgianna to include in a keepsake book for family and friends.
View Tribute Book

Georgianna Updike Tuck, many affectionately knew her as just “Gee”, 95, of Bedford peacefully finished the race on Saturday, November 5, 2022, after a gracious period of transition while being honorably treated in palliative care at Centra Bedford Memorial Hospital.

Gee was born in Bedford County, VA, the only daughter of Mack and Flora Updike. She treasured her brothers; Mack Hamilton (Ossie), Calvin, and James, who were certainly among the first to greet her upon her entrance to Glory. Calvin’s wife, Edley and James’ wife, Shirley remain to cherish their memories.

She graduated Moneta High School in 1945. During school she made many lifelong friends, one in particular named Arlene Tuck with an older brother named Clarence. Clarence took an interest in Gee and her “beautiful brown eyes”. They were wed January 10, 1948. The marriage expanded Gee’s family with loving in-laws, Earl and Elma Tuck as well as Clarence’s five siblings and their spouses. She was woven into the fabric of the Tuck family. Their years together were spent raising a family, building a home, and growing their faith. Later in life Clarence loved to travel. Ever the good wife, she was always by his side. Though he passed just shy of their 50th wedding anniversary, their commitment to each other and the family they created continued to thrive.

Blessed to call Gee mom are daughter, Brenda and husband, Jerry Tanner of Bedford, VA; son, Gary and wife, Audrey Tuck of Moneta, VA; second son, Douglas and wife, Wanda of Fredericksburg, VA. Additionally blessed were her nine grandchildren and thirteen great-grandchildren.  Her grandson, Samuel Tuck, was waiting for her in heaven.

Gee was simply our matriarch. The woman who ruled our tribe and the power behind our family. Any who knew her would nod in agreement that she would scoff and furrow her brow at such a title. Yet matriarch she was. She was simply our NorthStar. Gee - no matter if she was mom, Grandma Gee, Gee-Gee, sister, cousin, friend - was the safe warm place to start and to return. She was the smile you could hear through a telephone line. She was the green beans and chicken that she’d send home with you. We knew we could go and stretch and grow, because of the roots she had so carefully tended; and we always knew it didn’t matter if we returned triumphant, or licking our wounds, we would be met with her smile and embrace. She was our home.  God blessed us abundantly with Gee. What an honor to have been loved so fiercely by her, and to know we will continue to be covered by her prayers for the rest of our days. It is not goodbye - it is see you later.

A Funeral Service will be held at 12 noon on Saturday, November 12, 2022 at Quaker Baptist Church with Rev. David Timma & Rev. Vernon DeLong officiating.  The family will receive friends from 10:00 a.m. to service time at the church.

Look inside to read what others have shared
Family and friends are coming together online to create a special keepsake. Every memory left on the online obituary will be automatically included in this book.
View Tribute Book
Share Your Memory of
Georgianna
Upload Your Memory View All Memories
Be the first to upload a memory!
Share A Memory
Plant a Tree