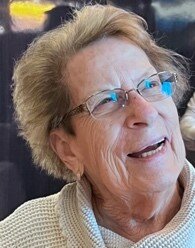 Please share a memory of Susan to include in a keepsake book for family and friends.
View Tribute Book

Susan G. Hammons went gently to her peace eternal on December 3, 2022 in Bedford VA. Susan Kimberly Gay was born on September 18, 1930 in Waterbury, CT, the daughter of Roger Eliot Gay and Ruth Hollister Gay. She is preceded in death by her husband, the Reverend John W. Hammons, and her two sons, Charles W. Haddock (Kate), and Clifford G. Hammons (Margaret).

She is survived by her daughter, Kimberly H. Coffey (Douglas), three grandchildren and six great-grandchildren. Susan was a descendent of Edward Doty who was a signer of the Mayflower Compact.

Susan graduated from high school and went on to the New England Deaconess Hospital
School of Nursing in Boston, MA. Later, she realized her dream to become a Morgan horse
breeder and trainer, and ran a horseback riding school at Far Well Farm in Swanzey, NH for
many years. Susan and John also raised Nubian milk goats. They retired to Arkansas in 1974
and started in the Brahman cattle business at Hammons Chapel Farm in Romance, AR which
they operated for 35 years. Susan earned the honor of being named the National
Cattlewomen’s Outstanding Cattlewoman of the Year in 2001. Susan and John were active
members of the First United Methodist Church (UMC) in Searcy, AR. She enjoyed being of
service to many as a volunteer at the church, the FUMC Thrift Shop and in the White County
Memorial Hospital in Searcy. Susan was an active member of the National Society of the
Daughters of the American Revolution (NSDAR) for 50 years, a former regent of the Gilbert
Marshall chapter in Little Rock, AR, a charter member of the Frederick Van Patten chapter in
Searcy, AR, and a member of the Peaks of Otter Chapter in Bedford, VA.

A memorial service will be held in January 2023 at Bethlehem UMC in Moneta, VA
where Susan became a beloved member following her move to Virginia in 2018 to live with her
daughter and son-in-law. Susan will be laid to rest at the Oliver Cemetery in Mount Vernon, AR.

In lieu of flowers, please consider a donation to the Alzheimer’s Association or the United
Methodist Committee on Relief (UMCOR).

To plant a beautiful memorial tree in memory of Susan Hammons, please visit our Tree Store

Look inside to read what others have shared
Family and friends are coming together online to create a special keepsake. Every memory left on the online obituary will be automatically included in this book.
View Tribute Book
Services for Susan Hammons
There are no events scheduled. You can still show your support by planting a tree in memory of Susan Hammons.
Plant a tree in memory of Susan
Share Your Memory of
Susan
Upload Your Memory View All Memories
Be the first to upload a memory!
Share A Memory
Plant a Tree