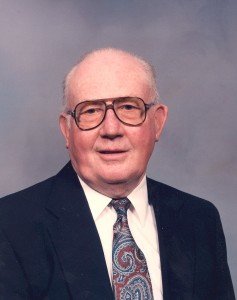 Please share a memory of Warren to include in a keepsake book for family and friends.
View Tribute Book
Warren Edward Burnette, 87 of Lynch Station, passed away Thursday, August 26, 2010 at Autumn Care Nursing Home of Altavista. He was born on Thursday, September 14, 1922 in Bedford Co., a son of the late Patrick Penn Burnette and Nellie Lacy Burnette. He was also preceded in death by his wife, Theta Jennings Burnette. He was a retired employee of Klopman Mills and following his retirement he worked for Harris Teeter Grocery for twelve years. He was a member of the Elks Lodge, and an honorary member of the Mentow Masonic Lodge, having received his 50 year pin while he was a resident of Autumn Care. He was also a member of Huddleston Church of God of Prophecy. Surviving is his daughter, Rebecca (Becky) A. Colwell of Forest; a son, Warren Edward (Eddie) Burnette, Jr. of Lynch Station; three sisters, Hazel Aycock of Greenville, SC, Mary Lou Burnette of Richmond, Agnes B. Austin of Huddleston. Funeral services will be held on Monday, August 30, 2010 at 1:00 PM at Huddleston Church of God of Prophecy with Rev. Wayne Murphy officiating. Interment will be private. The family will receive friends Sunday, from 4 until 6 PM at Huddleston Church of God of Phophecy. Arrangements are being handled by Updike Funeral Home &amp; Cremation Service, Huddleston.
To plant a beautiful memorial tree in memory of Warren Burnette, please visit our Tree Store

Look inside to read what others have shared
Family and friends are coming together online to create a special keepsake. Every memory left on the online obituary will be automatically included in this book.
View Tribute Book
Services for Warren Burnette
There are no events scheduled. You can still show your support by planting a tree in memory of Warren Burnette.
Plant a tree in memory of Warren
Share Your Memory of
Warren
Upload Your Memory View All Memories
Be the first to upload a memory!
Share A Memory
Plant a Tree