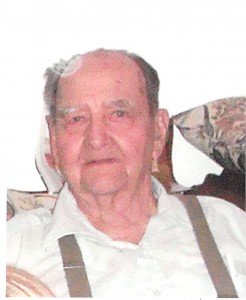 Please share a memory of Lloyd to include in a keepsake book for family and friends.
View Tribute Book
Lloyd Earl Allen, 91 of Thaxton, VA passed away Thursday, September 16, 2010 at Bedford Memorial Hospital. He was born on Friday, March 14, 1919 in Quinter, KS, a son of the late Eston Everett Allen and Mary Bunker Allen. He was also preceded in death by his wife, Irene Reed Allen. He wa a retired employee of the Rubatex Corporation and was a member of the V. F. W. and Union United Methodist Church . He was also a U. S. Army veteran having served in World War II and received a bronze star. Surviving are his daughters, Dolores A. Goff of Bedford, Joyce A. Ault &amp; husband, David of Forest, three grandchildren, Priscilla Goff, Christina Beckwith &amp; Stephanie Beckwith; a great granddaughter, Haylee Furrow; a brother, Glenn Allen of Argonia, KS. Funeral services, with military honors by American Legion Post 16, will be held at the graveside at Suck Spring Baptist Chuch Cemetery on Monday, September 20, 2010 at 11:00 AM. Friends may call Sunday after 11 AM and the family will receive friends from 4 - 6 PM at Updike Funeral Home &amp; Cremation Service, Bedford.
To plant a beautiful memorial tree in memory of Lloyd Allen, please visit our Tree Store

Look inside to read what others have shared
Family and friends are coming together online to create a special keepsake. Every memory left on the online obituary will be automatically included in this book.
View Tribute Book
Services for Lloyd Allen
There are no events scheduled. You can still show your support by planting a tree in memory of Lloyd Allen.
Plant a tree in memory of Lloyd
Share Your Memory of
Lloyd
Upload Your Memory View All Memories
Be the first to upload a memory!
Share A Memory
Plant a Tree