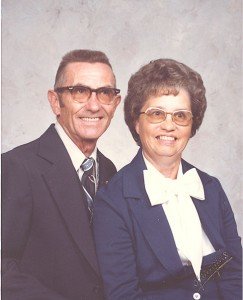 Please share a memory of Ethel to include in a keepsake book for family and friends.
View Tribute Book
Ethel Mae Ashwell Bennett, 90 of Huddleston, passed away Monday, September 13, 2010 at Bedford Memorial Hospital. She was born on Thursday, December 18, 1919 in Bedford Co., VA, a daughter of the late Frank Leslie Ashwell and Lula Ann McBride Ashwell. She was also preceded in death by five brothers and four sisters. She was a member of Palestine Baptist Church. A beloved wife and mother, she was married to her devoted husband, Meredith P. Bennett, Sr., who survives, on February 17, 1945 at Grand Island, Nebraska. She is also survived by her son, Meredith P. Bennett, Jr. &amp; his wife, Shirley; granddaughters, Cheryl B. Tuck &amp; husband, Brandon; Valerie B. Staton &amp; husband, Joshua, all of Huddleston; a grandson, Sidney P. Bennett &amp; wife, Anna of Alexandria; two great-grandchildren, Noah Grey Tuck and Emilia Naomi Bennett; a sister, Norma West and a brother, Boyce Ashwell, all of Huddleston, as well as numerous nieces &amp; nephews. The family requests those wishing to make memorials to consider the Huddleston Lifesaving Crew, P. O. Box 77, Huddleston, VA 24104. Funeral services will be held on Wednesday, September 15, 2010 at 11:00 AM at Updike Funeral Chapel, Huddleston with Rev. Jackie Carver officiating. Interment will follow in Virginia Memorial Park. Friends may call Tuesday after 12 noon and the family will receive friends from 6 until 8 PM at Updike Funeral Home &amp; Cremation Service, Huddleston.
To plant a beautiful memorial tree in memory of Ethel Bennett, please visit our Tree Store

Look inside to read what others have shared
Family and friends are coming together online to create a special keepsake. Every memory left on the online obituary will be automatically included in this book.
View Tribute Book
Services for Ethel Bennett
There are no events scheduled. You can still show your support by planting a tree in memory of Ethel Bennett.
Plant a tree in memory of Ethel
Share Your Memory of
Ethel
Upload Your Memory View All Memories
Be the first to upload a memory!
Share A Memory
Plant a Tree